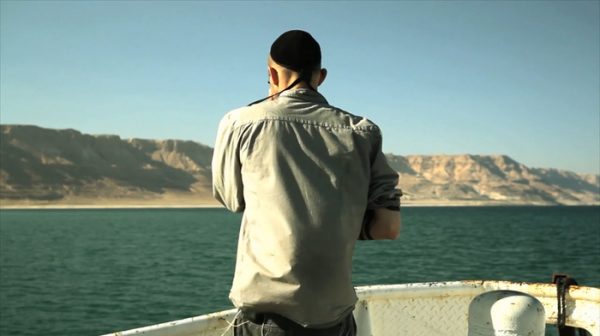 Jewish Museum Munich: In the past you successfully showed your movies at Israeli festivals. What does it mean to you that your latest work is premiering in Germany? What do you expect from the Munich audience?

It is always nice to have a premiere at „home“. I am kind of used to the Israeli audience, I know its „limits“, and i usually know more or less what to expect as a reaction to a film. My films are quite unique in the Israeli documentary landscape. They have a strong cinematic and aesthetic approach. My filming intends to provide the viewer with an emotional as well as an intellectual experience. As a filmmaker I am asking the viewer not only to receive the film „as is“ but also to input their own thoughts, to experience the film in their own personal way and interpret it. The screening of the film is a collaboration between the film and the viewer. Without both participating actively, the screening is not fully completed.

I am really looking forward to the premiere at DOK.fest and I am curious to see and learn how the local audience will receive the film.

Jewish Museum Munich: You do quite a bit of photography work. How does this background of yours affect your filming?

Ohad Milstein: Photography is my first inspiration and passion. All my films start in a way or another from a single image, which triggers me to explore and question.

In „Flood“ specifically i was fascinated by the different landscapes of my country which are unfolding within a very small geographic arena. In the North (at the border with Syria and Lebanon), one can find snowy pure mountains with water so crystal clear one can put their hand in and drink from. In the South (at the border with Jordan), there is the salty water of the Dead Sea that is useless for any living creature, surrounded by the rough desert and its collapsing environment. This geographical contrast of landscape together with the extreme meeting point of different societies living side by side (Palestinians and settlers) form the main essence and conflict of the film.

In general most of my films are following characters and exploring the way they interact with their surroundings, just like a portrait still photo expanding in time. The characters are usually choosing isolated and extreme lifestyles, disconnected from the society.

The development throughout my films is more about slowly coming closer to the character, getting to understanding their unique motivation through intimate dialogs rather than by following a plot or their way through a narrative.

Jewish Museum Munich: The Jewish Museum Munich is currently showing the exhibition „A Muslim, a Christian and a Jew. Eran Shakine“. You and Eran filmed a trailer for it together. In what ways do you think your and Eran’s work resonate with each other?

Ohad Milstein: I work with Eran quite a lot and i like his work very much. He has the ability to present very heavy and loaded issues with a lot of humor. My feeling is that in this specific body of work of Eran, he points out the artificial gap between different religions and erases it in a single brush stroke making us believe that we are all the same independently of our religious background. We are all humans. In“Flood“, I explore a similar question but found two different outcomes.

All of the characters in the film, Christian, Muslim or Jewish have some kind of a dialog with God. This dialog helps them to overcome a lack in their basic needs (water, society, knowledge, stability) . The film follows four characters that are distributed along the way from the highest point in Israel, at the Golan heights (Northern part) till the lowest point at the bottom of the Dead Sea (the lowest point of the Earth). The more we go southwards the less water can be found, but the intensity of the dialog and faith of the characters are increasing.

Unlike Eran, my second outcome, is that the gap between the different characters can not be bridged. It is a gap that is beyond us as individual human-beings. It is a gap that is created and that is serving bigger forces than the individual. These forces have no interest to erase the gap. Not in this region and not in this time. In that matter our works can be seen as antipodes.

Thank You, Ohad. We’re looking forward to welcoming you to the Jewish Museum in Munich.