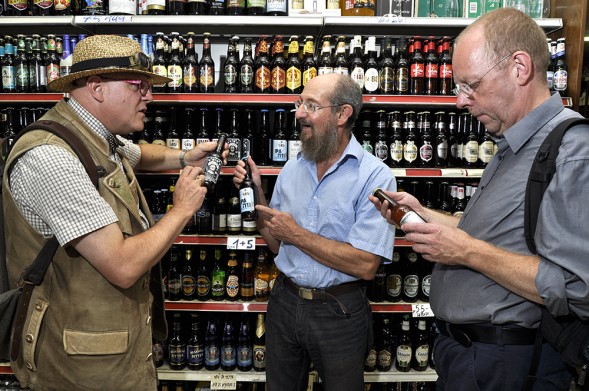 Bernhard Purin, the director of the Jewish Museum in Munich, and Conrad Seidl, the most famous beer writer in Austria, found me through the web log you’re reading now. They asked if I would be kind enough to meet them in Jerusalem, show them some nice craft beer locations, and perhaps accompany them to the Festival. 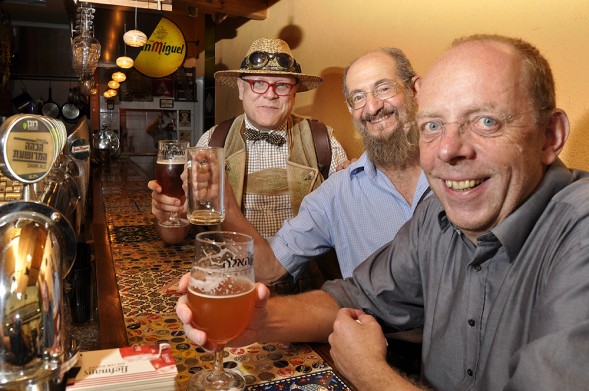 Oh, and there was also a very interesting project they wanted to discuss with me. What would you have said?

We met at the Machane Yehuda market. I had no problem recognizing them. Conrad, who is known as the Bierpapst (the „Beer Pope“), was wearing a traditional Tyrolean outfit, including Lederhosen. You can read more about him here and see his weekly beer review videos in English here.

I took them to my favorite „bottle shop“ in Jerusalem, Hamisameach on Agrippas Street, where they purchased several bottles of Israeli craft beers. 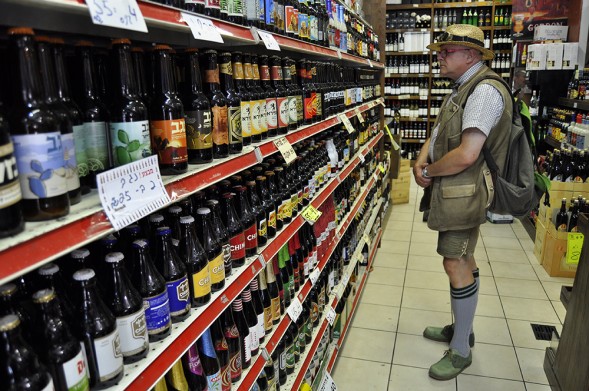 The „Beer Pope“ himself studying Israeli craft beers in the Hamisameach store.

As we walked through the market, Bernhard and Conrad couldn’t resist stopping at the Que Pasa tapas bar which has all seven beers of Srigim Brewery on tap. It was a hot day in Jerusalem after all, and one could only walk a few steps before building up a powerful thirst for a cold beer.

We continued on our way and ended up at the Bardak pub, which has five or six Israeli craft beers on tap.

In this perfect setting, Bernhard told me why he and Conrad were in Israel: „To drink the beer, of course!“

Next year, Bernhard informed me, is the 500th anniversary of the famous Reinheitsgebot (the „Purity Decree“), which everyone involved in beer knows was the first law which specified which are the only ingredients that can be used to make beer — which, in this case was only barley, hops and water. It was decreed in 1516 by the two dukes of Bavaria, and in some way or other, is still on the law books in Germany.

To honor this anniversary, the Jewish Museum in Munich is having a special exhibit entitled, „Beer is the Wine of this Land: Jewish Brewery Tales“ on the history of Jews in the German brewing industry. It opens in April 2016 and Bernhard has been busy gathering the artifacts, building the displays and generating publicity.

The exhibit will focus on such topics as Jews in the hop trade, the six-pointed star as a symbol of both the Jewish community and the German brewers‘ guild(!), Jews involved in brewing in Bavaria, and the saga of Lowenbrau beer as one of the most popular German imports in the U.S.

The exhibit will conclude with the modern era, including – what else? – the flowering of craft brewing in Israel. Conrad Seidl is serving as an adviser for this section. He is very enthusiastic about Israeli craft beers and believes that they will generate discussion and interest in Germany.

As to the „interesting project“ that I mentioned, Bernhard and Conrad are planning to sell a specialty beer at the exhibit – a collaborative brewing effort between a Bavarian craft brewer and an Israeli craft brewer.

The German brewery has already been chosen – the Crew Republic in Munich. While they were here, Bernhard and Conrad met with several Israeli brewers and will choose the winner in a couple of months.

„We’ll bring the winning brewer to Munich to make the celebration beer at the Crew Republic,“ Conrad told me.

„You know that according to the current German beer purity law, beer must only be made with grain, hops, yeast and water. On the other hand, Israeli craft brewers are very innovative in flavoring their beers with local fruits, herbs and spices. Yet, I’m sure they will be able to work together and brew an anniversary beer we can all be proud of. I can’t wait to taste it!“

As for me, your old blogger, as soon as I hear which Israeli brewer has been chosen to represent Israel, I will publicize it on this blog and on Facebook. This is a great opportunity to put Israeli craft beer on the map (at least the European map), and I plan to be there when it happens.

This article appeared first on israelbrewsandviews.blogspot.de at September 16, 2015